You are kicking around the idea of getting a new tool for your workshop. Since you are reading this, chances are you are getting a hammer drill sooner than later. And because you are looking into the Bosch 11255VSR hammer drill, it means that you are shopping for something that delivers maximum power and performance.

The Bosch 11255VSR is essentially a large-size hammer drill that crosses over well into rotary hammer territory. This makes it a proper power tool for drilling, hammer drilling, and chiseling, among a wide range of other applications. The design team at Bosch essentially built the Bulldog with the professional contractors–to be used in the construction workplace. Everything about the Bosch 11255VSR is commercial quality. Bosch products are known for their superior quality and this hammer drill is no exception.

At the heart of the Bosch 11255VSR is a 7.5 AMP motor that is capable of delivering up to 1,300 rotations per minute and  2.2 ft/lbs of impact energy making it a very capable of engaging just about every task you throw at it–be it  drilling, chiseling, and hammer drilling, etc. The Bosch 11255VSR is fast and powerful and drills through brick and concrete with a lot more punch than other hammer drill models might be able to.

The Bosch 11255VSR is designed with a very responsive variable speed trigger with reverse mechanism that make for a more precise and accurate drilling. The rotating brush plate of the Bosch 11255VSR delivers powerful performance in both forward and reverse–adding another yet another dimension of flexibility to this already robust hammer drill. 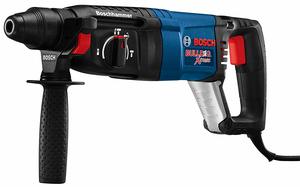 The Bosch 11255VSR keeps it weight to mere six pounds which makes it extremely useful when working on vertical surfaces like the chimney–minimizing unnecessary strain on the users back and arms. In comparison, smaller hammer drill units tends to be not powerful and bigger units tend to be cumbersome to use in difficult to access places.

The Bosch 11255VSR is a prominent contender as the best designed hammer drill in its segment. It features an ergonomic D-handle grip and an adjustable side-and-bottom mounted handle that allows for maximum control. All of the areas where your hands are most likely to hold and grip on the tool are covered in a rubber overmold that common to a host of other Bosch tools. This makes using the Bosch 11255VSR manageable even without gloves, and even with greasy or sweaty hands get greasy or sweaty. The trigger can easily be controlled with a one or two-finger pull. The side-mounted multi-function selector allows easy access to the Bosch 11255VSR’s rotation only, rotary hammer and hammer-only modes.

The Bosch 11255VSR hammer drill features the company’s SDS-plus bit system which allows for convenient, tool-less bit changes. Additionally, the SDS system enables the 11255VSR’s automatic bit locking and dust protection feature. The SDS bit system ensures maximum transfer of impact energy. People who have a lot of experience will surely appreciate what the SDS-bit system brings to the table. When working with concrete, bits tend to loosen out of the binding. This is not an uncommon issue, at least, with most hammer drills in the market. Bosch’s SDS bit system practically eliminate this problem altogether. 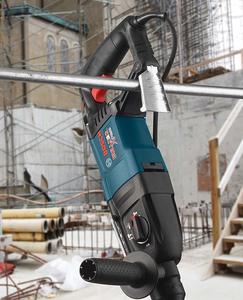 The Bosch 11255VSR sports an integral clutch that is designed to minimize torque reaction and consequently save the gears from any unnecessary damage, The integral clutch also double as a safety mechanism that allows the tool to be used more safely.

Among the most notable features of the 11255VSR is the inclusion of the Bosch’s patented Vario-Lock system. The Vario-Lock system is slowly becoming a universal feature across Bosch’s line of power tools. In the Bosch 11255VSR, the Vario-Lock system kicks in when the fourth position of the drill’s mode selector switch is engaged. When engaged, Vario-Lock aligns the chisel bit before going into chisel mode. Once the bit is locked in place, the drill secures the alignment during the chisel operation. Additionally, when in the Vario-Lock position, the Bosch 11255VSR is able to rotate and lock the chisel into 36 different positions–allowing the user to adjust the orientation of chisel in the middle of the operation.

To add more value for your money, the 11255VSR comes in a proper hard plastic carrying case–with decent finish and sturdy latches.

The Bosch 11255VSR Bulldog Xtreme is a great buy for professional contractors and home improvement DIYers alike. The 11255VSR undoubtedly deserves Bosch’s reputation for quality, durability, and performance. Suitable for commercial construction projects, you can expect this rotary hammer to become even more popular in the following years.