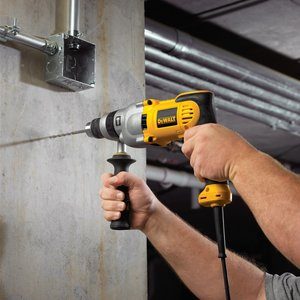 When shopping for a power tool, you want to get something that gives you great performance and intuitive operation. When it comes to power tools, DeWalt is one of the most trusted manufacturers known for making power tools that are dependable, rugged, and top of the line. DeWalt, over the years, has created a comprehensive catalog of construction and home improvement equipment.

When it comes to hammer drills, among the many makes and models in the market, the DeWalt DWD520K can be perfect for those who are looking to get an electric drill that comes with a solid hammer drilling feature.

The DeWalt DWD5200K hammer is powered by a powerful 10 amp motor instead of the 7 amp and 8 amp motor that comes with most other hammer drills in this segment of the market. In terms of power, the DeWalt DWD520K is a significant step up from the competition–allowing the unit to generate 50% more power than other makes and models. Outside of raw power, the patented motor of the DeWalt DWD5200K also incorporate an overload protection mechanism that further bolsters its durability. This machine is built to outlast the use and abuse in both the workshop and in the workplace. 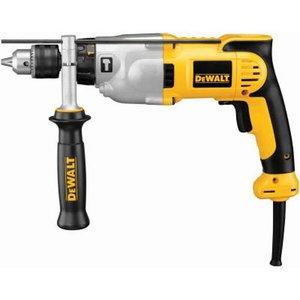 The DeWalt DWD520 designed with a two speed gear that sets the unit in two different modes–a dedicated mode for higher power output application and dedicated mode for higher torque output applications. The DeWalt DWD520 features a variable trigger switch that regulates speed control. This allows for slow starts and is handy when drilling into a wide range of different materials.  The DeWalt DWD520 is also reversible. Simply push the reversing lever control to the left to operate the drill in reverse; push to the right to run the drill forward.

The DeWalt DWD520 can be used either as a normal drill or a hammer drill. While the dual speed feature is designed exclusively for regular drilling, there is only a single speed configuration available for hammer drilling. To engage, there is a selector that activates the hammer drilling mechanism of the DWD520. When used in hammer drilling mode, this hammer drill unit is capable of delivering up to 56,000 beats per minute. 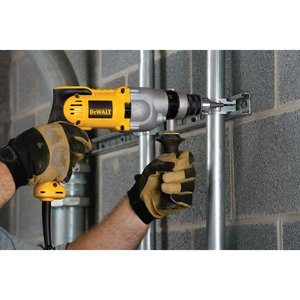 The DeWalt DWD520K sports a soft grip, a side handle, and two finger trigger that is designed to make the unit more comfortable to hold over an extended period of time while maximizing user control of the machine.

The DeWalt DWD520K is a cleverly crafted hammer drill unit that is built tough–enough to survive multiple drops, of course within reasonable height and force. The rubber, metal, and plastic components makes for a properly balance hammer drill unit that easily works through bumps and bashes. The whole unit is solid, including the base where the cord attaches to the drill–a common weak spot in other hammer drill units. This is important as drilling at odd angles and in tight spaces increases the risk of dropping the drill by accident. The DeWalt DWD520K sports the same level of build quality as that of a significantly more expensive tool and should easily last for years under normal use conditions 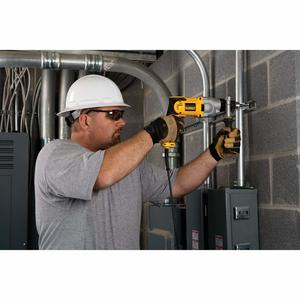 The rugged design of the DeWalt DWD520K does not interfere with its functionality and performance. The bulkier built of the drill is effectively offset by it 10 amp motor that is capable of quickly accomplishing whatever tasks you throw at it 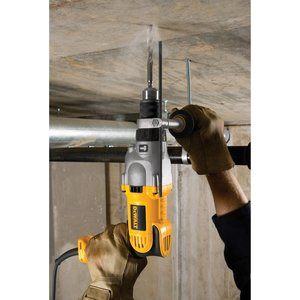 DeWalt has built a solid reputation of producing many exceptional products. Just like most of DeWalt’s other power tools, and the DeWalt DWD520K is made of tough materials–engineered to deliver reliable drilling and hammering work. With a build quality the construction that mostly metal part hardened plastic, an ergonomic grip designed for maximum comfort, and a guide rod that is easy to set at the beginning of a drill point, the DeWalt DWD520K is a good option to consider if you want to shop for or even step up to a more robust hammer drill unit.