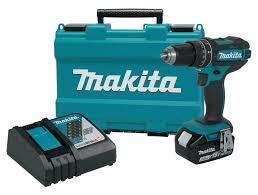 When shopping for power tools, something that tends to be understated is the fact that working on projects becomes far easier with the help of a cordless power drill than without it. Fortunately, today’s market provides a long list of these power tools–from cheap-bare-bones models to the higher-priced-higher-end drills manufactured by the well-known brands.

Makita is definitely one of the more reputable power tool brands – the Japanese manufacturer is among the most popular and best regarded maker power tools–with their products being well received by both consumers and the professional critics alike. Makita has built its solid reputation from the world-class quality, robust functionality, and faultless performance of their power tools. The Japanese manufacturer offers a wide range of power tools to DIYers and professional handymen who working on various materials–from wood, to concrete, all the way down to bricks.

Today, we are taking a closer look at one of their newer offerings in the competitive hammer drill market–the Makita XPH102 hammer drill. The Makita XPH102 is guaranteed high-quality hammer drill that designed to excel in terms of performance. It’s already among the most popular cordless drills that Makita has ever produced, and for good reason. The XPH102 is engineered to achieve ergonomic design, a powerful torque output, variable speed capacity, and portability, and its many other qualities that make it a worthwhile consideration for you next hammer drill purchase. So let’s take a closer look into the Makita XPH102.

At the heart of the Makita XPH102 hammer drill is a four-pole motor that delivers up to 480 in. lbs. of torque–producing an impressive 28,500 BPM and 1,900 RPM that is guaranteed to get the job done. This Makita model features a variable speed mechanism that allows the user to choose from two different speeds depending on the task at hand. The XPH102 clocks in faster speed compared to older Makita models, making a suitable device for a good range of drilling jobs. The Makita team did a fantastic job in producing an impressive and powerful device that will last for years to come.

The Makita XPH102 is built with some of the most durable materials in the planet, making it very capable of tackling even the toughest challenges. Despite this machine being built like a tank, the Makita XPH102 only weighs about 4 pounds total and measure about 7 ¾ inches long–so it won’t weigh you down. The light weight and manageable dimensions of the XP102 allows its user to control the tool and maneuver it into hard-to-access spaces. Because it is easy on the hands, using the XPH102 won’t be a pain on the arms and hands even when used fo an extended period of time. The grip is made from soft rubber so it is easier to hold and users can grasp it better even when their hands sweat while hard at work.

The XPH102 also comes with another convenient feature: its LED lights. The unit has two LED lights included which allows it to be used when working on projects in confined spaces or low-lighting environment.

The Makita XPH102 is designed with the company’s proprietary Extreme Protection Technology (XPT) that reduces the dust and water vulnerability–making for a more reliable device, even when subjected to the harsh working conditions.

The battery life of the XPH102 is yet one of its most notable feature–lasting for an average of at least three hours. Additionally, the XHP102 is equipped with fast-charging 18V lithium ion battery which only requires half an hour to charge using Makita’s dedicated Rapid Optimum Charger. Makita Rapid Optimum Charging technology makes the XPH102 among the fastest charging cordless hammer drills in the market. To make for an even more efficient power tool, Makita batteries are engineered with the company’s Star Protection technology that extends its use ability to twice the workload on just a single charge. Outside of extending battery life, Makita’s Star Protection technology is specifically designed to prevent any overloading or overheating. With Makita’s Start Protection Technology, the XPH102 is ultimately able to maximize optimal functionality and ensure the longevity of use.

The XPH102 comes with an extended warranty period of three years provided by Makita. Makita also offers to replacement or refund in case of any factory flaws within 30 days of purchase.

At day’s end, the Makita XPH102 is a reliable hammer drill that comes with a robust functionality and a host of convenience features. The Makita XPH102 is among the most models available in the hammer drill market. It’s built, from the ground up, to help handymen take on the most challenging tasks–primarily thanks to its design that allows it to be used for extended hours.

So should you buy it the Makita XPH102? Yes. If you are in the market for a cordless hammer drill, the XPH102 presents good value for the money. Price at $99, it becomes quite a difficult task to look for another hammer drill that could deliver 480 in. lbs. of max torque and up to 28,000 RPM speed. The Makita XPH102 also as handy, and ergonomic as it is powerful. If you are shopping for a hammer drill that has a lot power on tap, better battery life, and overall ergonomic design, then the Makita drill can easily be the choice for you.